Tim Clinch, real estate agent with F.C. Tucker Company, has had an ear for music ever since he was a little boy. He found that he not only loved to play—particularly the oboe, violin, and viola—but he also enjoyed teaching classical music at all levels, including youth, university students, and professionals.

After living on the east coast for 15 years, he moved back to the Midwest and for 3.5 years became a full-time temporary performer with the Indianapolis Symphony Orchestra, playing the oboe—the tuning instrument in the orchestra. When that position ended in 2012, at the time of the last economic downturn, he considered moving locations, but he had fallen in love with Indy and wanted to stay put. So he changed careers and got his real estate license. Transitioning from playing in an orchestra to selling real estate may seem like a big stretch, but Clinch says it felt like a natural move.

“The main thing was the shift in perspective. When you’re in the performing arts or teaching, you are always working within the constraints of what the organization is able to supply in terms of resources, pay, and time,” says Clinch. “Going into real estate, the biggest shift for me was to recognize that I am the businessperson. I am the entrepreneur. I can decide the way and the extent to which I want to do business as well as where I want to invest my time and talents to get the results I want.”

Clinch admits that initially it was daunting to embrace a new career until he realized that his background in music gave him a keen insight into the various communication types. This meant that he could easily dial into what each client needed. 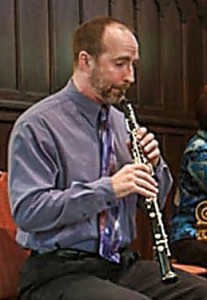 “One of the most exciting things about being in a professional orchestra with a fine conductor is learning to take nonverbal cues and run with it,” says Clinch. “You can have rehearsed a piece of music, but when you’re in the moment on the stage, a conductor can sense how an audience is taking it and steer things in a different way. On the spot, 90-100 musicians can make the change, enabling you to create something fresh and spontaneous.”

He does the same thing now when working with clients by taking the time to listen and observe, whether on the buying or selling side.

“You may have an idea of how a transaction will go, but I start to see cues,” says Clinch. “For instance, buyers often try to convince themselves that this is a good choice, but I can see by their body language that they are not going to be happy so I’ll be honest with them and encourage them to wait until there is a better choice.”

During his down time, Clinch enjoys hanging out with his dog Gwendolyn. It’s interesting the way he came to adopt his precious pooch. 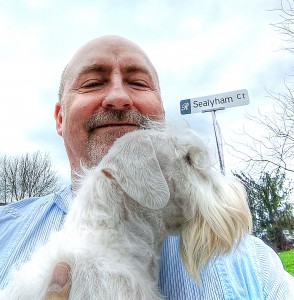 “I’m from a very large family, and we never had dogs growing up in western Montana, just a long succession of rescue cats,” says Clinch. When he ventured into real estate, however, he met clients who had some wonderful canines and he thought, “Hey, maybe I’m a dog person and never knew it!”

Then one day he heard a clip on NPR about Sealyham terriers, an unusual breed that once were incredibly popular but now are endangered with fewer than 500 left worldwide.

The man who bred them wanted a fierce, fearless terrier with strong jaws and teeth to rid his estate of otters. By accident, the breed ended up being super smart, friendly, loyal, hypoallergenic, non-shedding, and great with cats, making it the ideal pet for Clinch.

“I began reading up on them, and it sounded like a perfect match for me,” says Clinch, whose dog was born in Ukraine. “Gwendolyn’s mother is from Ukraine and her father is from Denmark. She has a Ukrainian passport with all her vaccinations listed in it!”

Sealyhams have a completely white coat and can have some grey, black, brown, or apricot coloring on their ears, face, or paws. They have hair that falls from their forehead over their eyes. Gwendolyn means “white forehead” in Welsh so it’s not only an adorable name but perfectly suited for her looks.

As Clinch continues to work in real estate, he’s thrilled to still perform frequently as a sub with the Indianapolis Symphony Orchestra where he plays the oboe and English horn. In fact, he played more than half of the Yuletide performances this year.

Clinch anticipates that the pandemic will have a profound reordering of understanding on how our economy works.

“When you think about what people are missing the most, it’s the live performances,” he says. “People appreciate and gravitate to the arts.”