'Rainbow Shot' is a DeKuyper win for local bartender

·  Add additional ice and layer in Fresh Orange Juice poured gently over a barspoon into the mixing glass. 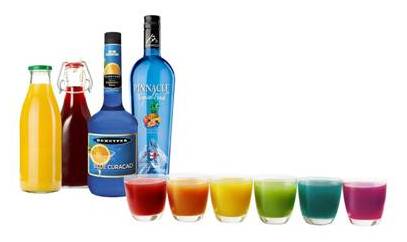 DeKuyper, the top-selling line of domestic cordials, announced the results of its 2014 Bartender Challenge in Indiana this week. The challenge, which took place this fall, called on Indiana-based bartenders to create a one-of-a-kind cocktail featuring one or more products from the robust DeKuyper portfolio of 70 cordial flavors.

Throughout the month of October, DeKuyper invited bartenders to submit a video of themselves behind the bar creating their own original cocktail recipe with a pre-selected DeKuyper liqueur flavor. After reviewing all of the submissions, DeKuyper narrowed down the entries to five finalists – hailing from Carmel, Crown Point, Indianapolis, Newburgh and Noblesville, Indiana – and invited consumers to vote for their favorite bartender at dkcocktailmasters.com or via the DeKuyper Facebook page.

Once all the votes were tallied, DeKuyper awarded Carolyn Connelly — a bartender at Mo's Irish Pub in Noblesville — the title of 2014 DeKuyper Cocktail Master. Carolyn’s impressive Rainbow Shot recipe wowed fans and earned her the votes needed to take home the title.

“We couldn’t be happier to announce Carolyn as our very first DeKuyper Cocktail Master,” said Brendan Lynch, Senior Director of Cordials and Rums for Beam Suntory. “We are so impressed with her creativity in developing a unique cocktail featuring DeKuyper that expressed her lively personality.”

“I’m so honored to be selected as the DeKuyper Cocktail Master!” said Connelly. “It’s great to be recognized for my hard work and creativity behind the bar. I’ve been a fan of DeKuyper for years now and love creating unique cocktails using its cordials.”

To learn more about the DeKuyper Bartender Challenge, please visit dkcocktailmasters.com. For recipes and more information on the DeKuyper Cordials and Liqueurs, visit www.dekuyperusa.com.

Beam Suntory was created in 2014 by combining the world leader in bourbon and the pioneer in Japanese whisky to form a new company with a deep heritage, passion for quality, innovative spirit and entrepreneurial culture.  Headquartered in Deerfield, Illinois, Beam Suntory is a subsidiary of Suntory Holdings Limited of Japan.  For more information on Beam Suntory, its brands, and its commitment to social responsibility, please visit www.beamsuntory.com and www.drinksmart.com.

This article appears in the February 2015 issue of Executive Portfolio.