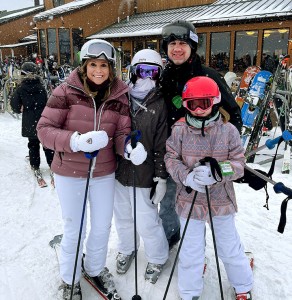 Laura Turner set out to start her real estate career on December 11, 2010. Just eight days later, on December 19, Turner took her 2- and 3-year-old daughters sledding at Forest Park in Noblesville.

“I absolutely love everything that has to do with snow—skiing, sledding, you name it,” says Turner. On this particular day, however, the snow caused a terrible accident when on her way down a hill she crashed into another sledder. Though thankfully the other sledder sustained no injuries, the collision crushed the bones in Turner’s face. Nevertheless, the accident didn’t sidetrack her career plans. In fact, she negotiated the sale of her first house in the hospital as she was recovering from reconstructive surgery.

“It definitely didn’t slow me down!” she says. It didn’t even curtail her love of snow sports. Though she has torn ACLs, ripped ligaments, and sustained countless bumps and bruises on the slopes, she can’t stay away. “I keep going back because I love it so much. Friends tell me I should wrap myself in bubble wrap!”

A dynamo in the real estate industry, Turner’s career soared, and in 2015 Turner was named the number one agent in the nation for buyers as she represented 351 buyers that year. She nearly doubled her volume personally each year for six years straight. Though she still logs lots of hours, she’s learned to delegate.

“It’s okay to let loose on the reins and let people you trust do things for you to free up more time so you can have a work/life balance,” says Turner. “I didn’t figure that out until five or six years into my career and it’s been a game changer for me.” 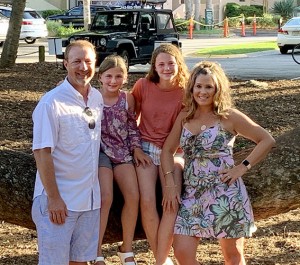 Married for 15 years to Brent, the couple has two daughters: Bevin (13) and Halli (11). Both girls play sports (golf and softball, respectively) so Turner spends her free time running her daughters around to all their sporting events and standing on the sidelines cheering. “I refuse to miss a minute of their activities even with a demanding career!”

And when they have downtime, the family loves to travel. The couple has a goal of visiting all 50 states by the time their daughters turn 18.

“I told Brent that we may have to stretch that to until they hit college,” says Turner, noting that they have already hit 29 states and just recently returned from Hawaii. “We are firm believers in work hard, play hard and in making the memories. While my husband and I both have demanding careers, our girls understand that we take our work on the road with us in order to create those memories and have those experiences with them.”

Their three favorite vacation spots are the Bahamas; Hilton Head, South Carolina; and Park City, Utah. Someday they hope to travel to Europe.

Though this past year has forced many to slow down—especially at the start of the pandemic when so much was closed and so many activities cancelled—the real estate industry didn’t pump the brakes one bit. Homeowners had the time to reflect on next steps.

“Some were ready for a bigger home. Others were like, ‘You know what? I don’t need all this space,’” says Turner. “The pandemic made people reevaluate their life choices.”

In addition, COVID-19 caused buyers to get more serious in their searches.

“It made people dial in on their searches so that we weren’t touring as many houses,” says Turner, who enjoys working in the real estate business because every day is different.

“I don’t think I’ve had the same day ever in my career. There’s certainly no déjà vu!” she says. Through the years, she’s negotiated just about everything, including a cat!

“Someone went through this seller’s home and decided they wanted the cat to go with the home,” says Turner with a chuckle. She’s also chased down pets who have sprinted out of a house she is showing—chased them while wearing heels, no less. And once she accidentally tased herself when she put her hand in her pocket. “My friends tell me I should write a book some day from all my comical experiences!”

One thing is certain—though she studied fashion merchandising and marketing in college, she’s found her true calling in real estate.

Contact Laura to assist you with your real estate needs.
317-363-0842 | TalkToLauraTurner@gmail.com
www.LauraTurnerRealtyGroup.com