Laid Back and Delicious: Twenty Tap

A modern day “Cheers” in Broad Ripple, Twenty Tap has been feeding Midtown residents tasty, healthy, local food for just over four years now. There are lots of hip restaurants in Broad Ripple, and for many of them, you might feel like you’ve got to put on some fancy duds to hit the town. Twenty Tap is not one of those spots. 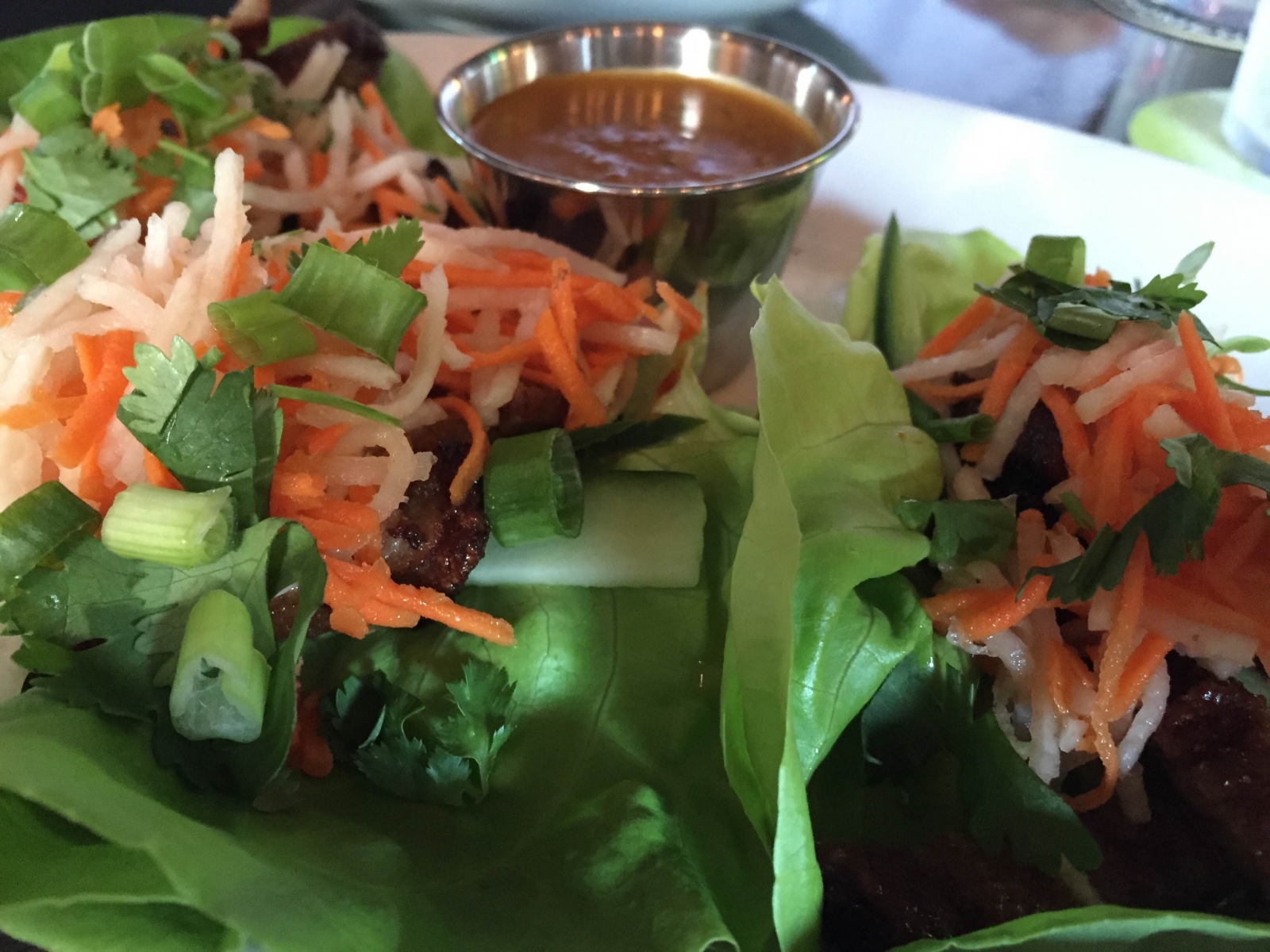 It’s packed most nights and they don’t take reservations, so arrive early or plan to grab a drink at the bar while you wait. But the food is definitely worth waiting for. Humbly presented, it’s most likely to arrive in a wax-paper lined basket. But when items such as the Vegan Banh Mi (a surprising combination of tofu marinated in chili sauce with pickled carrots and daikon finished with cilantro and jalapeno,) the Thai Fusion Tostada (garlic edamame hummus with curried tempura eggplant and broccoli slaw,) or the Korean-inspired Seitan Lettuce Wraps arrive humbly presented at the table, they give no indication of the explosion of fresh and innovative flavor profiles that are to come. It takes more than one bite to take in all of the complex combinations in each dish.

What do all of the above-mentioned dishes have in common? They’re all vegetarian, and there are many other vegetarian and vegan dishes on the menu as well. The Veggie Buffalo Wings (tempura battered cauliflower) may make you forget you ever wanted chicken. Even the “Simple” House Salad is anything but—it’s a lovely mix of amazingly fresh field greens, fennel, shallots, shaved Parmesan and a perfectly balanced house-made lemon vinaigrette. Other top notch vegetarian items include the house-made Black Bean Burger and the Roasted Mushroom Reuben, and if you don’t order the Warm Soft Pretzels with Beer Cheese, you’ll have to stop yourself from grabbing it from a neighboring table, because the smell is heavenly and they are divine.

Whether you’re a health nut or not, everyone loves French fries, and these are nicely complemented by a fantastic assortment of house-made sauces and aiolis, including chipotle, sriracha, horseradish, chimichurri, rosemary and curried ketchup.

Who is behind all this good stuff?

Twenty Tap is owned and operated by Kevin and Tracy Matalucci, a local couple who have been on the Indy restaurant and bar scene for quite some time. Tracy worked a caterer prior to launching their current venture. Kevin was a brewer at the Broad Ripple Brew Pub for nearly twenty years and also operated the North Side News and Café in the 20 Tap space for about ten years with some friends from high school. When they closed the North Side News in 2010, Kevin gutted the space and rebuilt it himself, and in 2011 they opened with twenty beers on tap (hence the name,) but nearly doubled those offerings within the first few months of business. The kitchen is run by head chef of one year, David Busenbark, who ably executes the Matalucci’s vision, creates new and seasonal dishes all the time and gives the other cooks in the kitchen the chance to create daily specials and soups.

They now have a diverse beer menu, printed daily, that features flights and pints of micro-brews from local staples such as Bier, Daredevil, Mashcraft, Outliers, Sun King and Upland, as well as regionals like Evil Czech and Three Floyd’s. They’re also brewing their own seasonal “Twenty Below” creations, which are identified on the beer list as coming from the “basement,” so bring your growlers. In addition to taps, there’s a nice selection of ales, saisons, sours and gluten-free ciders by bottle as well.

“We believe in quality, above all else, but at a reasonable price,” said Tracy. “We focus on fresh, seasonal ingredients, high quality meats from Indiana farmers, and attention to healthy items, including vegetarian. The majority of our beers are priced at $5.00 a pint, and we try to keep menu prices between $9.00 and $11.00.”

So whether you’re in post-yoga sweats or want to grab a quick bite of something delicious and nutritious on your way to a concert, stop in at Twenty Tap. You’ll be a regular before you know it!

Lunch and dinner, Tuesday through Saturday.

This article appears in the October 2015 issue of Executive Portfolio.