Paul Shoopman, president of Paul Shoopman Home Building Group, Inc., has been named a recipient of the prestigious Sagamore of the Wabash Award by Indiana Gov. Eric Holcomb.

During his nearly 50-year career as a leading homebuilder in central Indiana, Shoopman has directed the construction of approximately 10,000 new homes in dozens of developments in Carmel, including the new Waterfront of West Clay, as well as Zionsville, Westfield, Noblesville, Fishers, Greenwood, Indianapolis, Brownsburg, Avon, Greenfield, Ingalls, Danville, and more. He has inspected more than two million home construction sites, and continues to personally review every home built by his companies. 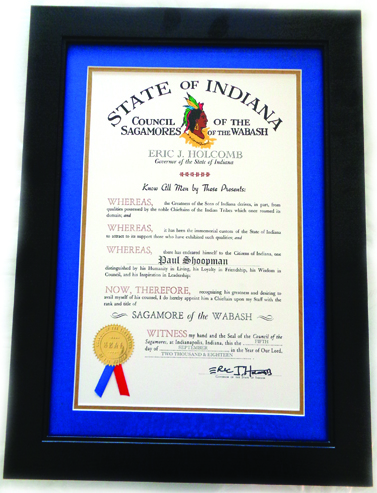 “I’m very honored to receive the Sagamore of the Wabash Award,” Shoopman said. “I have been blessed in my career to be able to build thousands of new homes for families in central Indiana, and it is a great and humbling privilege to be recognized.”

Shoopman attributes his company’s success to the people he has worked with. “The success my companies have enjoyed stems directly from the great employees, contractors and suppliers who have worked for Shoopman Homes and Dura Builders over nearly five decades,” he said “Their dedication and hard work have allowed us to create beautiful living spaces for our fellow Hoosiers and to give back to our communities. Those great people – along with my wife, Shelley, who has given me her love and support for more than 46 years – are the reasons for our success.”

In addition to his contributions as a homebuilder, Shoopman has actively supported communities in the state through philanthropic construction projects and charitable donations, including the Center Grove Lassie League Park and projects for Habitat for Humanity. Shoopman has backed a wide range of community groups, including the Boys & Girls Club of Zionsville’s facility. Also, he has financially supported The Presbyterian Churches of Indiana, Big Brothers and Big Sisters, Make-A-Wish Foundation, Ronald McDonald House, and many other organizations.

He was a leading contributor and Godfather to the St. Mary’s Child Center in Indianapolis, a non-profit group that provides preschool and early education services to low-income families. He also served a six-year term as a board member for the St. Vincent Foundation, which supports St. Vincent Hospital’s services for youth.

In addition to the Sagamore of the Wabash, Shoopman has earned several other professional honors during his career, including: Home Builder of the Year from the Builders Association of Greater Indianapolis, the Mike Boeke Outstanding “47 Years of Excellence” • Locally Owned and Operated • A trusted name in homebuilding since 1971 Service Award, and the John C. Hart Award by the Indiana Builders Association for longtime service to the housing industry and for efforts to maintain housing affordability in Indiana.

Shoopman also is a 2-10 Home Buyers Warranty (Diamond Builder Award winner) – the only Hoosier to have achieved this honor and among only 38 in the United States.

In 2003, Shoopman was named Indiana’s Entrepreneur of the Year and the National winner by Ernst & Young. Four years later, he and his wife, Shelley, were recognized by the Indiana General Assembly with a special citation for their charitable work throughout the state.

Shoopman Homes has crafted quality custom-built homes for more than 12 years. Prior to his current company, Shoopman owned and operated Dura Builders, Inc., Dura Land Development Inc., Dura Panel and Truss Inc. and several other homebuilding-related entities. Paul Shoopman built his first custom home in 1971 in Center Grove, and since then, his companies have constructed thousands and thousands of high-quality homes. Shoopman has established a reputation as the leader of energy-efficiency through the insulation technology blower door testing in the 1980s, and technology innovator, having implemented features such as vaulted ceilings, garden baths, two-foot extensions in homes, archways, advanced security systems, and raised-panel wood garage doors long before those features became standard in new homes in central Indiana. In his 47 years as a homebuilder, Shoopman’s companies have built in dozens of neighborhoods across Indianapolis and surrounding counties.

The Sagamore of the Wabash is Indiana’s highest civic honor bestowed by the state’s governor. The award, which was established by Gov. Ralph Gates (1945-1949), has been presented by subsequent governors to Hoosiers who have distinguished themselves in their contributions to the culture and success of the state. Past recipients have included astronauts, ambassadors, presidents, artists, business executives, community leaders, and athletes, among others. The word “sagamore” is a term that was used by Native Americans to refer to a lesser chief who provided valuable wisdom and advice to the tribe’s leader.