I hope blue is your favorite color, ‘cause it’s ubiquitous at Stella. You’ll walk in the door to undulating wall paper in shimmering waves of indigo, the servers are dressed in varying shades of faded blue denim and the hostess is sporting a teal top with royal blue pencil skirt (I know, I know, but she makes it work.) Everything in this place reminds you of the sea. Including the menu. Taking in the heady array of seafood choices could make a girl momentarily forget she’s landlocked in Indianapolis. Stella aims to bring the flavors and feel of Spain to the Circle City. And on most every level, it succeeds.

On a recent trip to Barcelona, this juniper-loving girl was delighted to find that the gin and tonic has somehow become the national drink of Spain. (Sangria be damned.) Stella brings the new Spanish concept of the gin and tonic menu to Mass. Ave, with enticing choices such as Ford’s Gin with Hibiscus Tonic Elixir, Orange and Juniper. A veritable fiesta en la boca.

The starters section of the menu offers a lovely selection of crudo (king crab, Hamachi, scallops and more, as well as oysters and clams.) If seafood isn’t your jam, you’ll be excited to find all kinds of meaty starters under “cured things and terrines.” And then there’s the mysterious heading of “bread culture.” As it turns out, this is the true tapas section of the menu. Much like the tapas bars in Spain, the appealing combinations of ingredients are piled prodigiously high on two thick slices of toasted bread. Really good bread. We tried the grilled octopus with chicory and grilled lemon, and while the octopus itself was quite salty, the mellow acidity of the grilled lemon balanced it quite nicely. We loved it.

We had decided to share a large plate in order to have room for several of the sides, and after agonizing over our cocktails between various choices including the rabbit pappardelle and the osso bucco, we had settled on the Thursday night featured plate of the butcher’s steak. We ordered the carrots and the mushrooms as our two sides. We were at peace with our choices until another server sailed past our table with a steaming bowl of mussels piled high with some really gorgeous frites. All of a sudden, we were those two kids who are feeling pretty good about their small vanilla cones until another kid saunters by with a triple banana split. In a panic, we frantically flagged down our server. Had she put our order in yet? Was it too late to change our minds? She smilingly reassured us that it was not, in fact, too late. Breathing a huge sigh of relief, we ordered a bottle of wine to calm our nerves. 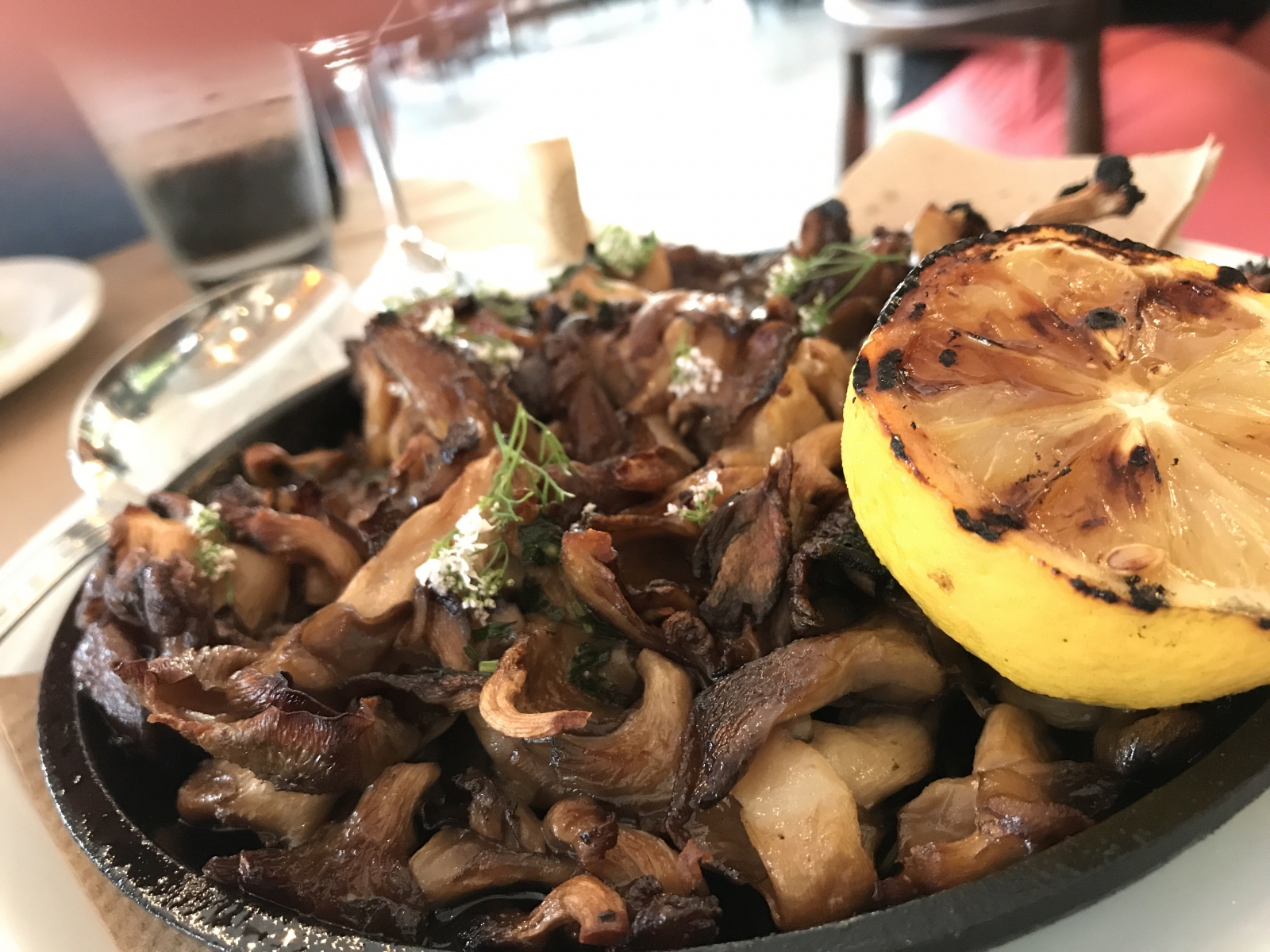 When our dinners arrived, the mussels were as glorious in person as they had been on parade, and the frites were perfection. Rough cut and twice-fried, they were crispy on the outside and creamy on the inside, as only a lovingly made fry can be. The mussels were heavenly, with chunks of garlic vying with the mussels themselves for real estate in the bowl. And the Pernod-scented broth is the kind of thing you want to be alone with in a corner, armed only with a straw.

But the real stars of our meal were the side dishes. It’s almost impossible to put into words how much I loved those carrots and how I want to eat them every day for the rest of my life. Cooked with the same love as the frites, they have a tawny brown sear on the outside and just the right amount of crunch. They arrive lazing around in a puddle of garlicky hummus and finished with harissa, cilantro and candied cumin. Yes, candied cumin. The ember-roasted mushrooms were decadently finished off with tarragon butter and a squeeze of fresh lemon.

We paired our feast with a Catalonian garnacha-carinena blend. It was perfect with our meal; earthy and rich. However, the wine list is where Stella really diverges from a true Spanish experience. People love to say that in Europe, wine is cheaper than water, and while that may be a slight exaggeration, a seasoned European traveler would balk at paying more than 20 euros for a decent bottle of wine with dinner. At Stella, while the list is small and carefully thought out, it’s hard to find anything for under $50 and the average cost lands closer to $75 a bottle. Those watching their budgets might just opt for a second gin and tonic.

As for the décor, much like a girl who took her big sister’s hand-me-downs and rocked them at the prom, Stella’s stylish confines bear little resemblance to her predecessor, Pizzology. Even the entrance has moved. Yet for all its sleek aqua sophistication, the ambiance still misses the mark a tad. Thin, white butcher paper covers the tables and the space feels unfinished, as though they’ve not quite moved fully in. It needs greenery. It needs to feel cozy. It needs soft surfaces to soak up the clatter of the open kitchen and the rambunctious 14-top on the high banquettes. There’s a coolness to the space that fails to pay proper homage to the warm, sunny sidewalk cafes and beachside eateries Stella is trying to recreate. But this is the only critique.

Stella is the latest brain child of Neal Brown, who still operates the original Pizzology in Carmel as well as the Libertine Liquor Bar in the basement of the Stella space, and it’s a grand addition to Mass. Ave. The servers were gracious and attentive. The busy line cooks called thanks out to us as we left. The food was divine and left us wanting more. And we’ll be back. There’s an entire gin and tonic menu to work through.

Lunch and dinner; Tuesday through Saturday. Closed; Sunday and Monday.

This article appears in the December 2017 issue of Executive Portfolio.