From Clients to Lifelong Friends

After working for two decades in sales and marketing in the automotive industry, Nicole Lyon decided she was ready for a career change. “At the 20-year mark, I was burnt out,” says Lyon, who began working for F.C. Tucker Company in 2010 when the market had really crashed.

At the time, her friends and family questioned her sanity. “They were like, ‘Why would you want to get into real estate right now?’” she recalls with a chuckle. Though she admits that those first few years were pretty difficult, it wasn’t long until her business soared.

“I have a passion for helping people,” says Lyon. “It’s not just a sale. It’s about getting involved in the whole process and getting to know those people you work with.”

That’s precisely why she’s become lifelong friends with some of her clients. For instance, one of them was a woman who, over the course of 13 months, she showed more than 100 houses.

“She and her husband were on such different pages with regards to what they wanted,” says Lyon, who recalls that the wife would give her a list of eight or nine houses each day and off they went. Ultimately, the couple chose a home with no basement in an area they didn’t like. She smiles at the thought because though they ended up with nothing that they wanted, it was everything they needed—including the forging of a lifelong friendship with Lyon.

“We text or talk very often. I’ve seen her kids grow up and even supported her through cancer,” says Lyon. “Had it not been for real estate, we wouldn’t have formed that connection and been there for each other during such critical times in life.”

Lyon loves being outside in nature, taking long hikes with friends, and working out. She’s also an avid reader and traveler and especially loves Hawaii and the Caribbean. Her most memorable trip was in 2008 when she and her daughter Jennifer went to Beijing during the Olympics. They toured the Olympic village and got to see where the torch was lit.

“China is beautiful, and the landscaping is so interesting. So are the people,” says Lyon. “We walked part of the Great Wall of China. It’s an architectural miracle the way it’s built—so hilly and up and down and around. The people who built it had great ingenuity to figure it out.”

Her daughter is now 28 and lives in Brooklyn, New York, working for NBC in the sports advertising and marketing department. She’s had great opportunities over the past three years doing things like working on SNL, the Indy 500, and the French Open. This summer she got to work the Olympics for three weeks. 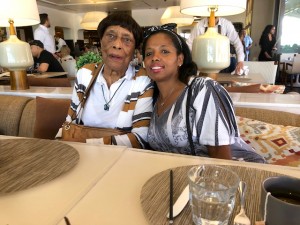 Lyon also adores her 98-year-old mom, who still lives on her own in the north suburbs of Chicago.

“She still drives and is pretty independent,” says Lyon, who has stayed busier than ever over the past year and a half.

“When COVID-19 started, I thought I was going to have a decent year. As it turns out, I had the best year ever,” says Lyon, who by June 2021 had already surpassed what she had done in 2020. Though the industry has been crazy, she feels fortunate to have been involved more on the seller’s rather than the buyer’s side of things.

“My colleagues on the buyer’s side have told me, ‘This is the sixth house I’ve lost with these buyers and they’re getting very frustrated!’” says Lyon, who notes that it’s a challenging market because there are investors all over the country who are buying up homes.

“When you have a buyer, it’s, ‘ready, set, go’ almost 24/7 because when something comes on the market, you’ve got to be ready to go see it, put in an offer quick, and help your client make the best decision possible,” says Lyon. “I feel very blessed in real estate. It’s rewarding because you get the opportunity to help those who really need your assistance. The money is just icing on the cake.”